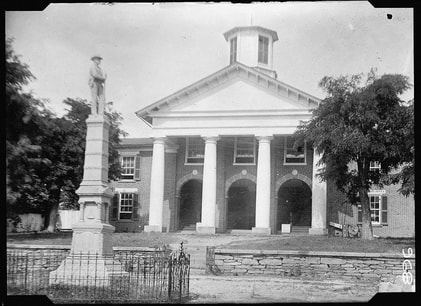 Photo from the 1912 Harris and Ewing Collection
The Historic Carroll County Courthouse was built in 1872 by Ira Coltrane and was used actively until 1998. There have been 3 building modifications/upgrades since 1872. Originally in the shape of a capital "T" with the crossed end facing the street. In 1929, 20 feet were added to the south side and back making it more like a capital "H" turned sideways. In the 1950's a smaller addition was made to the northwest side.

The walls were built as two walls, one inside the other with an airspace between them. Most of the wood used was yellow pine with a some chestnut and walnut.
Original Courthouse Drawings